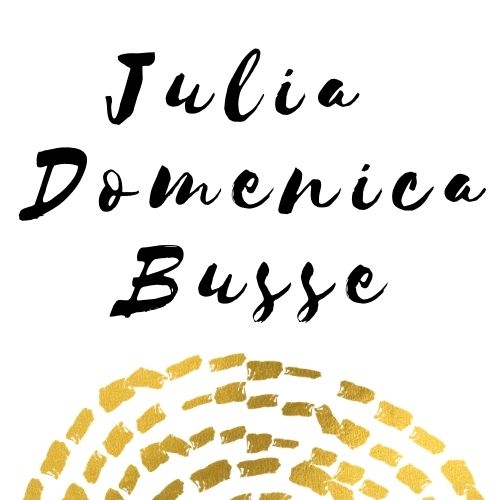 Julia Domenica is an exceptionally gifted actress. Her remarkable talent, her good comprehension, her versatility, her professional behavior, her dedication, her perseverance and discipline (even in difficult situations), her teamwork, her sympathetic demeanor speak for her.
In our close collaboration with my new feature film “Lisa and the Painter”, which went far beyond the normal frame (preparations for the film, filming, editing, color grading), she proved to be an absolute stroke of luck! As an actress she has something you can not learn: a strong charisma, a great charisma and magic.
I can imagine her in many roles. She has the gift to penetrate deeply into a character and to present it convincingly. In this sense, she is predestined for extraordinary roles and occupations. Not only because of the fact that we are now a couple, but out of deep conviction, I have already planned for the next major role in my next feature film. She is a jewel, not a mainstream phenomenon, but a personality with a special character.

It was a pleasure to work with Julia. Her professionalism on set and her great talent as an actress make every director’s job easier. Her fast capacity to play her role is outstanding.

Julia Domenica is an empathic, courageous, touching and absolutely present actress who brings her roles to life in a very clever and true way. My collaboration with her was a beautiful, powerful, very creative and inspiring experience that I would not want to miss and hopefully repeat soon.

“A gracious and generous actress.”

“I had the wonderful pleasure to work with Julia Domenica on the thriller feature film: ‘The Dossier’. Our characters interacted heavily together. The on screen chemistry between our characters, have developed effortlessly and naturally, as she was a total professional and such a brilliant actress to work with.
Hands on heart, with conviction and without equivocation, I can boldly and honestly say that Julia is one of the most talented and natural actresses I have ever worked with, she carries her talent with grace and sincerity. Julia is seen by all as a beautiful person, humble and genuine.
Julia has such a strong screen presence and natural beauty that is captivating to the viewers. Any casting director / film director, who hire Julia, will be pleased to have her on the project team and find her a great addition to the cast.
Julia brings a wealth of knowledge and talent, a team player full of positive energy, bringing to the roles she plays a special edge on to the screen. I personally very much looking forward to be working with Julia again, either on screen as an actor, or as a director. I already have her in mind for 2 leading roles on two feature films, as I fully trust and believe she will do the characters I’ve written, a lot of justice and make them lovable and memorable.”

“My favourite actress. Ever time I see a new picture of you, it’s like seeing a new Julia for the first time. You seem to be able to take on a different persona in each picture. Oh, you are a little chameleon, aren’t you! Such diversity is seemingly second nature to you. What a beautiful talented girl you are! (…) You really are a special person, and I do hope that we can meet again, and perhaps work together again in the near future.”

“On meeting Julia I found her to be very friendly and listened to all of her direction, which she acted on accordingly. She had the ability to adapt and discuss her role and dialogue, contributing to any changes we felt necessary on the day, a great help to the production team. She got on well with the “Family” of The Dossier, an atmosphere that was created due to the personalities involved and the efficient way everyone went about their tasks, none more so than Julia. It is important that a small team such as we had on our production, get on with each other and Julia was very well liked and respected for her professionalism and talent. A true asset to us, I would love to work with her again, many thanks.”